"We delight in the beauty of the butterfly, but rarely admit the changes it has gone through to achieve that beauty."


They say everyone has a story. This is mine. You may find it interesting, it may bore you to tears, but it’s mine, and if it can help even one person, I need to tell it. It’s not easy for me to expose myself like this. I am not a transparent person. Some may call me emotionally closed off, which I suppose is true. However, I feel like the story needs telling.

When we see weight loss transformation pictures in social media, or on commercials advertising weight loss products or gym memberships we don’t get the story. We only see the superficial changes that have taken place. We don’t hear about their struggles, their failures, their heartaches, their supporters, their discouragers, their enablers. We don’t hear about THE FIGHT. So, naturally, we feel a disconnect to these people. And while their transformations are incredible, and can give us a certain hope, they don’t help us with the inner-struggles we face. It’s easy to feel alone in our journey. That’s why I’m telling this story. I want you to connect with someone who has been where you are, and who has overcome the struggles to become who she wanted to be. 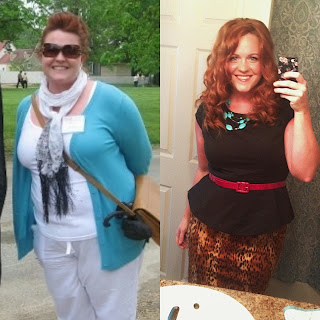 I used to say that I’ve always been “chubby,” but that’s not entirely true. My struggle with my appearance started at around 13, like it does with every girl, but it was not because I was “chubby.” I only THOUGHT I was chubby. I look back at pictures and realize that I actually had a rockin’ body at 13 & 14--it was just very mature, unlike all of my girlfriends. THAT was the issue. COMPARISON. Never mind that I had a body most 25 year old women would have envied, I didn’t have a body like other girls my age and I let that ruin my self-esteem.

So it began. A constant struggle with my appearance. Being trim was never going to be easy for me--it’s in my genetics. I was destined to have to always work hard to look a certain way. Curves were inevitable and slow metabolism was cursed upon me at birth. To top it all off, I LOVE food. I always have, and I’ve never known when to stop. Combine those things, and you can guess what happened. I eventually got “chubby.”

I was confident is so many ways, but when it came to how I looked, I hated myself. In our modern culture we are inundated with images of thin, fit women--even as a teenager, the teen magazines had unhealthily thin models--and as a result, this was the ideal of beauty I naturally developed, and I knew that I was never going to meet those standards. According to their ideals, I wasn’t “beautiful.”

I graduated high school, and my opinions of how I looked became even worse. I was dating my husband, and I had convinced myself that he didn’t like the way I looked. I was convinced that I was never going to be successful because of how I looked. I felt dowdy compared to all of the other college girls. I wanted to change, but I didn’t know how. I hated myself for eating so much, so I stopped eating so much. I had a slow progression towards eating disorder. I went from one extreme--food addiction--to another. I was disgusted by the thought of putting food in my mouth. I dropped to only eating about 500-1000 calories a day. Then I started purging. At first I would only purge after a binge, then I started purging every time I ate. I hated purging, but I saw it as my punishment for eating. I took dangerous (now illegal) diet pills--often more than the recommended dose. And I would do 1-2hrs of intense cardio 6 days a week.

I lost weight. Not surprising. Didn’t people think something was wrong? No. Not everyone who has an eating disorder looks like a skeleton--I looked fantastic. People would ask what I was doing, and I’d always answer “diet and exercise.” I was very successful at hiding my destructive behavior. As much as I hated myself for being overweight, I hated myself even more for the eating disorder. It made me miserable. I didn’t feel good--physically or emotionally. I would spend so much time in front of the mirror analyzing every part of my face & body, hating most of what I saw. It’s funny how hating your looks so much is really just another form of vanity--obsessing over yourself. 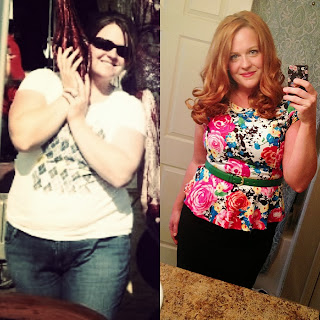 The emotions and struggles that accompany an eating disorder are hard to describe. It’s a feeling of power and self-control, all while feeling hopeless and out of control. You are never at peace with yourself. One moment you think to yourself, “I am never doing this again because I feel awful,” and then you need to do it again to feel better. It’s a horrible cycle.  The irony of it all is that your intention is to lose weight, yet when you do you never realize it because the image you see in the mirror is so skewed from reality.

My husband and I got married, and I slowly let go of the eating disorder on my own. I did have relapses of binging and purging and severe calorie restriction, but I eventually I went back to the other extreme of food addiction. My last two years of college were stressful and I dealt with it by eating. I slowly put weight back on. I graduated college, and we decided to start a family.Enter pregnancy.

I did not handle pregnancy well. I used it as an excuse to eat, and eat, and eat. I gained an absurd amount of weight. I had my first son, and managed to get back to my pre-pregnancy weight, but again I did it the wrong way. About 500 extremely low carb calories a day and a lot of cardio. I was starving myself.

We decided to have another baby after only 8 months, and after all of that restriction I went crazy with food, using pregnancy as an excuse. My overeating and pregnancy weight gain greatly affected both of my pregnancies. I had preeclampsia with my first, and gestational diabetes with my second. I had no idea how to care for & treat my body. I was either destroying it by not eating enough, or destroying it by eating too much. You can’t properly care for something you hate. That was the root of my problem. I was destroying my body because I hated my body.

I now found myself the mother of a newborn and a 16 month old. How I looked was of little concern, until I would catch a glimpse of myself in the mirror. I hated the way I looked. I knew I didn’t want to go back to the eating disorder. As much as I hated being overweight, having kids made me not want to return to that destructive behavior. So I tried every kind of weight loss program out there, but I felt like nothing worked. Perhaps it’s because I gave up too soon, but all of the low fat calorie counting and long cardio sessions left me feeling miserable. So I would do it for a couple of months, lose about 10 lbs, and stop.

I decided that, whether I lost any weight or not, I wanted to feel NORMAL. It wasn’t even about being thin anymore, although I was hopeful--I just wanted to feel heathy both physically and emotionally.

I had NO IDEA that something called “Paleo” even existed. It wasn’t until I started doing research into fitness & health that I realized I was eating a Paleo diet. But it was working! After only 3 weeks, my energy soared. I felt like a new person. I was losing weight, I felt satisfied, and I was happy. I did more research and read more articles about Paleo, and seeing the science behind it convinced me even more that this was the RIGHT way to eat. 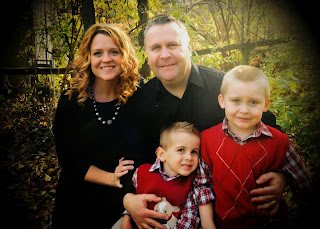 The weight fell off, but that’s not what is most important about this story, I was becoming a new person! I started lifting weights and setting goals beyond just pounds lost. I began loving my body--not because I was losing weight but because I FELT incredible. This lifestyle truly helped me overcome the eating disorders. I really focused on intuitive eating--eating to live, not living to eat. I learned I didn’t have to obsess over calories or take diet pills or purge my food to lose weight. I just had to feed my body the right things.

As of today, I’ve lost a total of 60lbs and dropped 5 jeans sizes--the RIGHT way. I still have goals in front of me, and I’m striving towards those everyday. I know that I will reach them with persistence and consistency.

Do I still struggle? Absolutely. I can clearly remember my last binge--it was purely emotionally driven, and the moment I was done I had to fight an overwhelming desire to purge. I still have moments when I look in the mirror and point out everything I dislike about myself, but those moments are happening less and less. Am I the thinnest I’ve ever been? No. But I’m ok with that. I’m learning to love my body, even with all of its flaws. I may never wear a bikini. I will probably never have the body of a Crossfit competitor--but my body is amazing! It carried two babies for 9 months and brought them into this world. It can squat 195lbs and dead lift 205lbs. It can hike 4 miles to the top of a mountain, and climb back down again without a struggle. My body can do things I never thought it could. I’ve learned to appreciate my body for what it can accomplish--not how it looks.

Most importantly, I’ve learned to stop comparing myself to other women. I’ve learned to ignore the unrealistic ideals of beauty perpetuated by media and Hollywood. Sometimes when I watch commercials or walk past a Victoria’s Secret ad, I still feel like that 13-year-old girl who hated herself because she didn’t look like the other girls. But I have to remind myself that just because I don’t look like her doesn’t mean I’m not beautiful. That’s why you won’t see me post images of other women’s bodies for fitness inspiration. Not because they aren’t amazing, but because we need to focus on being the best version of ourselves possible--not the best version of someone else.

That’s why I have started this blog. That’s why I promote this lifestyle through Instagram and Facebook. I hope to inspire people. To give people hope. To encourage you. I shared this story with you because I want you to know you are not alone and you can overcome whatever struggles you are facing. If you need help, get it. You absolutely can change your situation. My little “motto” is : Stay hungry. Stay healthy. Eat clean. Train Dirty. Now that you know my story, it makes sense. Don’t starve yourself. Don’t damage your body. Fuel it properly. Push it to it’s limits of strength, and find beauty and confidence in all that you can accomplish!

Laura Epps
I am a wife and homeschool mom with a passion for Paleo living and cooking. I started following the Paleo lifestyle in November 2011, and haven't turned back! With a total weight loss of 60lbs, Paleo literally changed my life! I am not a chef, nutritionist or Paleo specialist, I am just a girl who wants to inspire others to eat real, healthy foods that fuel and nourish your body and soul!