"It's not a case of living forever. It's a case of enjoying every year you have." ~Donal O'Neill 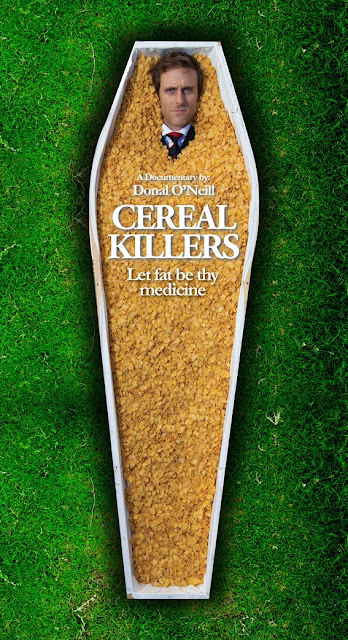 When someone on my Twitter feed retweeted a request for people to contribute to the Kickstarter campaign of a new food documentary called Cereal Killers, as a faithful advocate of gluten and grain free living, I was immediately intrigued. I watched the promo video and knew I had to contribute. The moment someone says they want to debunk the current popular views of food and health, I'm all in-- especially where saturated fat is concerned! And, I was very intrigued to watch the process of a bio-hacker in action.


Donal O'Neill is a trim, fit and, for all intents and purposes, healthy man. Based on his appearance, he's not exactly your typical "food experiment documentary" test subject. Most real food documentaries follow the transformations of overweight or severely medicated individuals, so why did Donal want to experiment with his diet? He wanted to hack his genes.

Donal's father was a top soccer athlete--lean, physically active, non-smoker, non-drinker-- but suffered a heart attack. His uncle was also a top athlete, but developed Type II Diabetes. From all the information we've been given on what is a healthy lifestyle, Donal's father and uncle should not have suffered from heart disease and diabetes.

I've seen similar situations in my own family. My grandfather who was always trim, active, and a non-smoker had to have open heart surgery in the 70's-- I remember celebrating the 25th anniversary of his surgery because it was so rare in the 70's for open-heart patients to live that long. My father has always had an athletic figure with very little effort. He's relatively active, a non-smoker and non-drinker, though his diet leaves something lacking even by the traditional food pyramid standards. However, based on typical risk factors he should've never needed to have stints put in his arteries. My uncle is relatively trim, very active, a non-smoker, and a healthy eater, yet he had to have triple bypass surgery. My brother, who is a trim and active non-smoker and non-drinker, has cholesterol issues.

When we come across these situations where people don't exhibit the typical "risk factors" for heart disease or diabetes, we chalk it up to genetics. Genetics does play a role, but is it everything? Is heart disease inevitable for my brothers and their children? Was it inevitable for Donal?

Donal wanted to see if he could change his genetic destiny with his diet. It was obvious to him that the standard low fat high carbohydrate diet promoted by government agencies and health associations didn't yield benefits for his family, or for many others. So under the watchful eye of an open-minded doctor, and with the assistance of Tim Noakes, professor of exercise and sports science, he decided to follow a high saturated fat diet for a month in an effort to find out if saturated fat and red meat were really the problem, or if there are other things at play.


Donal followed an incredibly high saturated fat diet,  including animal fat. He ate bacon cooked in butter, macadamia nuts by the handful, and eggs galore. His daily caloric intake reached upwards of 4,000 calories a day. He decided to follow a different exercise routine as well. While the recommended amount of exercise is 150 minutes per week, Donal did only 8 intense minutes of exercise per week.

What The Film Covers


Cereal Killers covers everything from Ancel Keys's study on saturated fat to carbohydrate resistance to how cholesterol really works in the body. Professor Tim Noakes gives a wealth of information on cholesterol that is especially beneficial. The movie also deals with the issues surrounding the food and drug industries and information control. It also touches on why we began feeding corn to cattle. If you want a film that quickly covers the basics of food and health, this is a great one to watch.


OH. MY. WORD. I loved this movie! I don't want to give away the ending, but if any of you have been following me for long, my excitement is probably a dead giveaway.

I want to go ahead and touch on what I didn't like first. I wish they had gone into a little more depth with the issue of grain fed animal fat versus pastured animal fat. They touch on it a bit, but never really expound on the issue. As someone who subscribes to a Paleo lifestyle, I obviously support only eating pastured animal fats. Also, I can't agree whole heartedly that extremely low carbohydrate diets are the answer to everything. I think ketogenic diets have their place, however I believe that the consumption of resistance starches can be beneficial to many. And, I can in no way support his overconsumption of macadamia nuts! That's way too many phytates and lectins for anyone to be consuming on a regular basis. These are really the only negative things I can say about this movie.

While the film didn't go into any great depth with scientific analysis and explanation, it certainly provides plenty of information to get the viewer open to the idea that perhaps what we've always been taught  is healthy actually isn't good for us at all, and that is a huge step in the right direction. It makes the information understandable to anyone, even people who aren't that interested in all the science. It was a very human take on food and health, chronicling this man's experiences with friends and strangers to whom he would talk. It manages to, in one short hour, make the viewer feel an overwhelming connection to Donal and his situation. The stories of his experience with his father's health are very touching. I think this movie takes an approach that many food documentaries lack-- the human side. The fact is, the health of our loved ones is important, and when we see them suffer, or suffer ourselves at the loss of loved ones due to diseases we know can be preventable, we want answers and the answers we've been given thus far aren't working. It was also surprisingly fun to watch! For such a small budget film, the quality is outstanding, and the overall tone was positive yet touching. The movie didn't end with you feeling guilty for all your food choices or hating "the man." The movie left you feeling hopeful-- that change is possible not only on a larger social scale, but for your health personally.

Overall, I highly recommend watching this documentary. While not necessarily ground breaking in the area of saturated fat myths, it takes an approach that is accessible to everyone, and will certainly get people thinking about whether conventional health wisdom is really wise at all. I rate this a MUST WATCH!

You can download the movie HERE at letfatbethymedicine.com. I trust you will enjoy it as much as I did!
Posted by Laura Epps at 7:38 AM

Laura Epps
I am a wife and homeschool mom with a passion for Paleo living and cooking. I started following the Paleo lifestyle in November 2011, and haven't turned back! With a total weight loss of 60lbs, Paleo literally changed my life! I am not a chef, nutritionist or Paleo specialist, I am just a girl who wants to inspire others to eat real, healthy foods that fuel and nourish your body and soul!